This week I am running/facilitating two sessions called song swaps, and hopefully will not look as surprised as I do in this photo taken last year at a day I ran for the Southampton Gospel Choir. 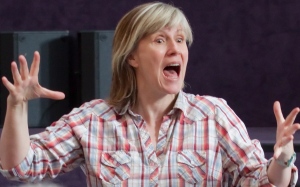 For those of you not involved in community and school singing, a song swap is when  a bunch of people get together and share simple songs -they are usually simple as people teach them by ear. The people go away and then teach the songs to other singing groups they have. Many are rounds, chants and simple songs from around the world.

I have been requested by a lovely student at the Institute of Education in London to run a session where I teach  students doing a Post Grad Teacher’s Certificate some simple warm ups and songs from Africa, I have a feeling I am the only one swapping songs..but who knows.

Today a similar thing somewhere else in the City..but there will be more swapping me thinks! Both are good.