There is a song by Del Amitri called ‘Fred Partington’s Daughter’. I am Fred Partington’s daughter, but  I don’t think the song is about me. I, at this point, refuse to mention if any of the things in the song resemble any part of my former life – ha ha ha, though having said that I did spend a good deal of my early years working in bars, so I could spent the rest of my time writing songs, as did many of my musician and artist friends, but I am scarless. 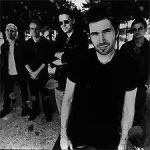 Sad to say Fred Partington’s Daughter came to a sticky ending in this song and I am still very much alive and kicking. It is a B-side, but just uncanny in many ways. I do believe  one of the things that  seriously committed Del Amitri fans did was to  look in their local phone books to find a Fred Partington. I like the song.

I thought maybe one day I could write and sing a song with Justin Currie, the singer, when his is slightly older and greyer – though he may be too much too busy sing a song with  Fred Partington’s daughter.  Actually I may be much too busy to sing with him….. ha ha ha! No seriously though…would that not be a funny way to meet?