So there I am with some special 8 year olds today..trying to find out what they are into as far as singing is concerned…’I wanna sing my music not yours’ so what was their music, the music an 8 year old was calling theirs?

Of course it depends on the kids and wh 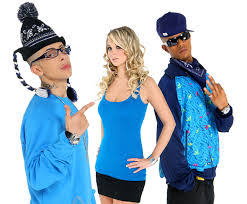 ether they have older siblings, younger parents, background,  etc……’N Dubz’, they say, (a London hip hip group) …’I won’t be able to play it today’ I say ‘…need to check out if the language is ok for school and we might be able to sing it, but some of the words really are not really that good for children’…I explain. We sing  Jessie J’s ‘Price Tag’ as I  know the lyrics are fine  and a bit thoughtful.  I go home and listen to the first song they have on their list  and the words are , ‘girls I  f+++  with them’ mmm wonder what I can change that to. ha ha. The whole song is too grown up lyrically…’two little boys’ it ain’t. By no means anything like as bad as some of the baaad aaasss rapping we can be  exposed to, but I wonder if they know how many little kids listen to their music and if it would have any affect on their lyrical content….and I am talking about lots of bands not just Ndubz….just interested thats all.

Loads and loads of primary aged kids are listening to hip hop and rap, much of it is ‘good time rock n’roll’,  I mean, it was good enough for Rex Harrison, but some of it  is not lyrics I would want teenagers to spent too much time listening too let alone little kids. I wonder if these artists are aware how many 8-10 year olds are taking their music to their heart. I am not being preechy here…or maybe I am….ah well.

SONG OF THE DAY Michael Jackson -Will You Be There

We are delighted to announce the release of our 5th album and we are very happy to be releasing under the wonderful umbrella of the Welsh Independent Record Label https://www.swndrecords.com/ The abum has taken more than a couple of years to finish. Lots has been happening for us all during this time and we are […]

Stop Press. Our New album CATCH MY BREATH is ready to pre-order & will be released on SWND Records on 11th February – that means you can order the digital and get a track now, or the proper real CD . I am hoping that many people will celebrate with us and support your local […]

No-One Can Hear Me

out tonight at 7pm ..and counting

I’m Not Gonna Rock This Boat

Pretty grim round here due to Gitika losing her mum  and we are all very sad. Here is our new video that we did actually finish 2 months ago but been too raw to post. So now it’s  posted everywhere in the crazy social media flurry you have to do, so sorry if you have […]

I REMEMBER (THE SIMPLE THINGS)