‘they gel so well, it’s as if they have been jamming together their entire careers’ – The Musician 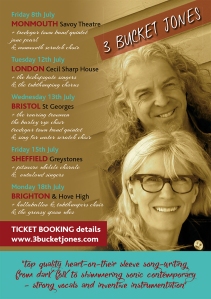 3BJ met at a songwriting workshop at Monnow Valley Studio in 2013 and formed a band on the first day they met and wrote a song. They are all experienced musicians and producers all born in the 1950s – their musical diversity is the thing that makes it work – composing music for kid’s TV, producing with Trevor Horn and teaching 5000 children a song in the Albert Hall are included on their list of musical endeavors.

Their second album – 8th July coincides with a song from their first album ’All at Sea’ being sung by 1200 singers in Bath for SING FOR WATER WEST – an event which raises funds for Water Aid – arranged and conducted by Gitika. They decided all their tour and album sales during would go to WATER AID.

Their tour takes them to Monmouth, Bristol London, Sheffield and Brighton. Every gig involves local musicians – In Bristol, at the beautiful St George’s – Gitika ’s brother’s sea shanty group  -The Roaring Troman, her mother’s (85) folk choir and members of the world champion Tredegar Town Band. The London Cecil Sharp House gig has a 70 strong community choir on backing vocals & they will also be singing songs about water.

3 Bucket Jones are Andy Mcrorie-Shand on stringed things, Gitika Partington on ‘sky-scraping vocals ‘ (the MU review this month) Garry Hughes in the studio, and featuring Bruce Knapp on guitar and dobro for the tour. Their music is ‘heart-on-their sleeve’ dark folk-pop. The tour will be a delight.