Happy Birthday To YOU! Blimey me and Mickey go back a long way. I think we ‘went into the studio’ about 1984 or 5. I met him in a local pub, and the rest, as they say is history.  Hundreds of gigs and songs later…..So its MBG’s birthday today.

Congratulations for reaching a fine age, and see you later, the trifle is nearly ready! To celebrate this birthday I am publishing a few fine photos of me and 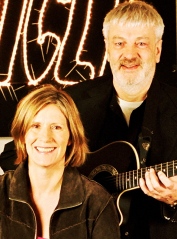 Mickey through our musical partnership through the years and a little bit of video of us practising just the other week. – It is very good of Mickey to let me play the guitar with him as he is an old master, as I am really a bit of a fledgling.

I am still sorting out my speech for January 1st and my proper life plan for the next year in between sorting out my computer which is on misbehave mode, so has to be turned off and ignored until it calms down and remembers its place. It sounds a bit silly to have a ( before I  kick the) bucket list, but it is good to have a focus , not that I really need more to do!

The first time I saw Mickey he was playing in his band Penguin Fury at the Stapleton Pub in Stroud Green in about 1982. He was the guitarist and they had a stuffed penguin at the front of the stage. They were very good. The drummer Bruno Perosa is a film maker too   (he edited Raining In China) the thing is can you work out which of the band is Mickey?