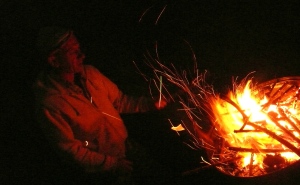 Now don’t get me wrong, I am very partial to a quick ‘Gingang Goolie Goolie Goolie Watcha’ round the camp fire, as the best of us. But I am not “like totally” into bonfires. Mr P on the other hand just loves his bonfires, and any excuse to set fire to a bunch of old wood, and he is ‘heaven sent’. I was thinking about bonfires just the other day as an old friend sent me some pictures of someone we used to know, who had been, at their ending, burned  on a pyre in India. Loved ones  attended the ritual and danced around the pyre (there is a very strong smell for a bit). At the end of the process, all that was left was tinder and bones, and a clear picture of the person’s skull. I thought this was magnificent and think it would be much nicer to have someone’s skull when they were gone than a carton of ash that could be any old ash. Worth reading the hindu man in newcastle, BBC article that forbids him from having his body burned in a funeral pyre with all his family watching in the UK.  I can really see the wonderment of being burned on a big bonfire and your soul flying off in the flames…sounds rather good to me. And then my skull could be put on the mantle piece with a flower in it!  I found a cool site called the Good Funeral Guide that has a great little blog about funerals around the worlds and different traditions. 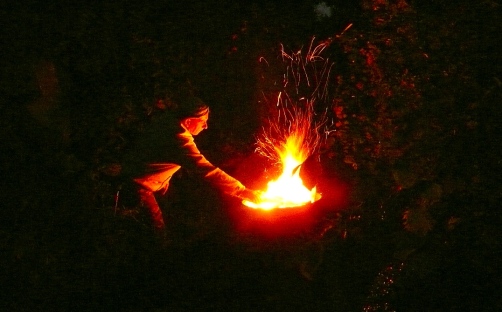 Goodness, not really being gloomy here. All happened because the old man had a bonfire in the garden, and wondered why men often seem to really love bonfires. Also thinking about all the significances of fires, beacons, light, heat.

The Poozies -We Build Fires.

The Poozies began their career in 1990 after Patsy Seddon and Mary Macmaster, aka the Scottish harp duo, Sileas, had been working with singer Sally Barker on a solo album. They all agreed that a new women’s group was a good idea and when Sally met the all-Ireland accordion champion, Karen Tweed, at the Hong Kong Folk Festival, the band was born. This is a lovely track and the words are tops. It is also a lovely song to sing as a big choral piece, though the ‘bingo style’ tinsel fringey stuff in the back of the stage sort of add a strange incongruousness to the poignancy of the lyrics and performance.