Sparklers and New ‘Posh and Becks’ 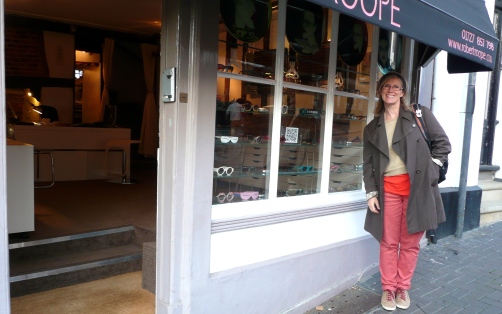 Earlier this week I went out to Snalbans, (that’s St. Albans to you) not far on the train, to a fabbo opticians and frame makers called Robert Roope, who also have a really lovely website if you fancy some new trendy bins ( glasses). What lovely people! If your ‘posh and becks’ ( specs) are feeling a bit old and tired this is the place to go , or you can do the whole thing on line, if you have your prescription.  I had a right old time last year at Specsavers as I had to have my prescription done 4 times,  I kept banging into things,….3 times out of four it was not the same, and they kept sending my bins away and forgetting the coating or the reactolight…etc.

I went into Robert Roope as I had gone to their website and chosen a pair of frames ( ekhibit one melud) but I thought they maybe were just a little bit too Andy Warholy, and when I asked a mate if she thought they were good, her top lip tensed, as she told me they were great, which is what mine does if I am lying – oh no the secret is out… (she might have just had top-lip cramp, you never know…hope you are laughing CM!) So I thought …go to the shop and try the other sort you like – same but a little smaller, then you can get the lenses done too…

and I did (exhibit two me lud). Now you might think that pair one and pair two look  the same, but actually the camera on my computer is a bit fish eye, as pair number definitely look smaller in real life, and are just like old National Health glasses, which just tickles my fancy it does. I cannot wait to put a bit of sticking plaster on the bridge! There is an up and a down to these new  ‘posh and becks’ though. The lenses make my eyes look bigger which is a plus, but the magnifying also magnifies any puffiness or wrinkly, crepy bits round my eyes, so it is win, lose…bit like life really …ha ha! I just love them. And they arrived in the post 3 days after I went and tried them on! Specsavers ‘they will be ready in two weeks if we remember to call you’…look and learn.

It was like a war zone round our way, both last might and the night before. We did our bit. Had a bonfire and lit a couple of sparklersc( you can hear all the noise in the background)

SONG OF THE DAY – Vangelis and Jon – State of Independence

I am shocking myself when I say this, as it has never ever happened before in my entire

life, but I sorted out my cds yesterday and put them all in really proper alphabetical order! I found quite a few shockers which got sent to the charity shop and several that I had never even listened to. My work cds are still all in bits, but it is a start. There were more  cds beginning with B and S -I made sure to file artists by their surname and bands by the first name. There was nothing in the “V” section …so today , something beginning with “V”. When this came out we all marvelled. Donna Summer did a good job of it too, but it was Jon Anderson, from Yes and Vangelis who wrote and recorded it first. Let us compare and contrast today too!

2 Responses to “Sparklers and New ‘Posh and Becks’”