Strewth!!! Watched Inception last night and the sound track only stopped about twice…once for five seconds and once for a 2 miniute gun fight…( oh and I did have a little snooze for about 10 minutes near the end) it is sooooo annoying to having music continuously under dialogue. Another reason not to watch Hollywood blockbusters. Such a waste of the budget, as I find it really really irritating and unecessary and distracting. In my opinion a really rubbish film…garh…I wanted to watch the Social Network…but Mr P. won, because he had had a horrible day and needed cheering up -the film did not .

the railway and my cappuccino

Very short blog today from an amazing cafe in Waterloo

…Lower Marsh called Scooter…missed it the first time I went down the road. Here is a picture of me on their veranda at 16.59pm drinking capoccinos…wow! 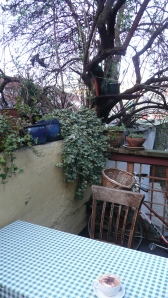 the tiny patio of SCOOTER

I wish I had sound-o- vision as the noises of the trains from Waterloo Station and the traffic is very evocative. My laptop is about to lose power so I may not get to song of the day until much later on today. Have been on a course today to learn how to be interviewed for radio and tv…will tell you more tomorrow. Phew a blog is done….byeeeee!

The Beatles It’s getting better all the time (it couldn’t get no worse) I used to think the Beatles were uncool when I was a kid but some great great songs…this one sums up the feeling of today….