No no no please…I surrender! …. ‘Just Another Manic Bun Day’ was really the headline in this article about today’s festival in Sweden, that celebrates one of those  things so Swedish, ( drum roll please) the Cinnamon bun (news to me).  It is a fairly new festival and  frankly seems to be a bit of a marketing ploy for the  home bun makers. I cannot really get a jist of what happens on this day,  possibly everyone just tugs their forelocks to the baker while helping themselves to another cinnamon bun, which seems ok for the Swedes,  who even have  a day called ‘Fat Tuesday’ – which, in all fairness is the day you traditionally  use up all your fat before wandering into the desert to be with Lent  for 40 days, with not so much as a bun to keep you company. I thought to compare Bun Day with 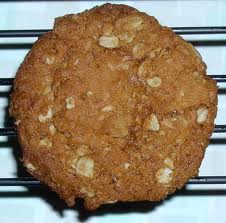 Anzak Day in Australia  and New Zealand which, as far as I was aware, was when everyone just tucks into plentiful supplies of Anzak buscuit…but there is, as I discover more to the day, commemorating all those who died and served in military operations for their countries. The Antipodean extension tocthe Easter Egg…just another excuse to eat confectionary in the name of something more profound.

It has been claimed  that the  biscuits of that name,(which includes as its ingredients  – oats, dessicated coconut, syrup) were sent by wives to soldiers abroad because the ingredients did not spoil easily and the biscuits kept well during naval transportation. Today, Anzac biscuits are manufactured commercially for retail sale.

Back to the Cinnamon Buns, I have to say, there are many more things I think of as being more inherently Swedish, like the pickled herring, the Saab, the gravlax,  the blonde hair, the meatball, and a big yellow and blue logo. Ah well….good for them…All hail to the bun! The cinnamon bun! (which I would have been tempted to call a Danish Pastry)…and if I was not gluten intolerant I would probably join you.

A more redeeming festival happens  today, in Mozambique. Day of Peace and Reconciliation.   I continue to be amazed and in awe of the people in this world who forgive their  enemies and captors – Nelson Mandela being a shining beacon for me. It is always easier to forgive people if they are sorry. But if they are not…then how can you start? I suppose you then forgive someone for being so messed up, that they cannot see the way they behave is cruel and hurtful. Still very difficult, that’s why we have Saints I suppose. Here’s to the to-martrys. (We have a school near us called Thomas the Martyr, which gets called Thomas the Tomato)!

SONG OF THE DAY –  The Bangles – Manic Monday

Oh well …it had to happen really. It is in my head now ‘manic bun day’ ha ha. Did you know it was written by Prince? Neither did I.