behind you!!!!…panto time has arrived 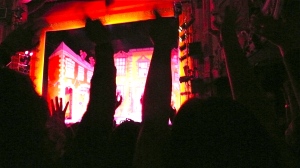 I am back, feeling good, completely cheered up!  All  thanks to the amazing Hackney Empire pantomime, which this year is Cinderella. It only took me 30 years of living in London to get to the BEST PANTO IN TOWN. I went last night, completely on a whim.  It was absolutely  blinkin’ marvellous..miss it at your peril..I won’t ever miss it again. There was proper singing, songs, acting, dancing, belly laughs, panto horse, choreography, costumes and sets. I was completely captivated. 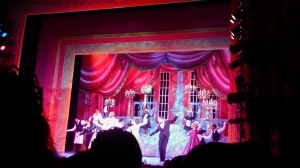 The wicked step-mother played by Joanna Riding was my favourite, a great actor and  stunning singer, her credentials were tip top. I also thought Kat B who played one of the ugly sisters was very very funny. There was not a weak link in the whole cast, I loved them all…I am gushing ..which is really unusual when I go to theatres, but the standard was un-be-leivable. There was a woman at the end of my row who told me she had been coming every year for 25 years even though her kids were now giants, she came on her own and never misses it. I am now top fan and will do the gruesome bus ride back to Holloway more often  -which turned out not to be as bad as I remember, as the Empire has loads of good things on over the next year, and the theatre itself is so beautiful. And the 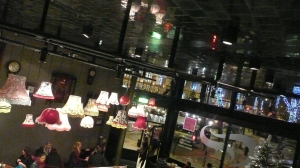 cafe! Great food, ( Mr P. had lamb hot pot and a huge hunk of cake and real tea with leaves…sadly I had just had 2 rather extensive bowls of homemade yellow split pea and fennel soup just before I came out) wonderful ambience  (listen to me) and really good value. Hackney has got lovely shiny christmas lights in Mare street and the Picture house across the road looks good too. 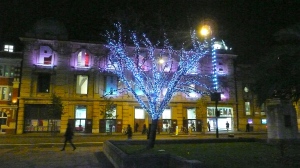 Funny that I have now been to Hackney 3 times in a week and probably had not been there for years. I also notice they have a newly formed community choir (my mind is racing about trying to collaborate with them some time) and lots of really great artistic development programmes. I shall be returning very soon.

We went to a panto in Wimbledon a couple of years ago and  left at half time as it was so gruesome. It had some ‘star turns’ in it who looked like they had walked in the theatre for the first time the same morning, the sets were piss poor and Brian Blessed looked as though he was reading his lines (which were a bit poor) from a book of spells, the sets were really shabby and I have to say I felt sorry for people who had forked out humungous amounts of money to bring all their kids, not that you could hear anything over the tumultous rustles of sweet rappers, throughout.

Talking of theatre etiquette, panto is the time to spot it, or the lack of it. Now this is the thing…heckle, boo, hiss, cheer but talking in loud tones to your fellow theatre goers about whether they would like you to put the rest of the crisps in the car for later and such tripe in the middle of well crafted dialogue is not cricket. There were people behind us, Dads particularly who thought it was fine to have loud ‘convos’ with their parties whenever they fancied it. Why is it many people think they have to speak in such raised tones to children, so all and ‘Sunday ‘ can hear them…children are  not usually deaf! (but may  well be soon) There were a bunch of  young preppy looking students from across the water who did not understand panto tradition at all..it was their first, so I shall forgive them a bit – every time a pop song by an american artist had been incorporated into the marvellous score  they all yelped and did groovy rappy hand gestures in time to the music and got all quite hysterical….yes, yes, it is a Katy Perry song, we know who Katy Perry is…calm down…calm down….. now try and understand the context.

So that is Christmas done and dusted. Next Year I am going to book the first night of the Hackney Empire panto on the last day of November, cook a turkey, send gifts and cards and then December is mine, to do with what I please…

253,829,844…that how many different  people have watched this video on youtube. Mixed feelings about these sort of worthy ‘you are beautiful, no matter what they say’ songs,  but I have written several songs which have the same sort of message, so I should not knock it. I sang this at a gig with DC earlier this year and realised it is a blinder of a song to sing.